skip to main | skip to sidebar

On the 24 I hosted a Halloween party. It was a ton of fun. We played three games. We played the witches brew game, a ring around the pumpkin, and my favorite the mummy wrap game. For the mummy wrap game we saw who could wrap the best mummy. After we had the contest everyone buried me in toilet paper. After that they started to toilet paper our tree so I got out of the pile and helped them. Then my dad said to find the secret piece of toilet paper we searched for a while and found out that is was a teeny tiny piece of toilet paper. After that we watched Wallace and Gromit and the case of the Were Rabbit. I had a great time at my party. 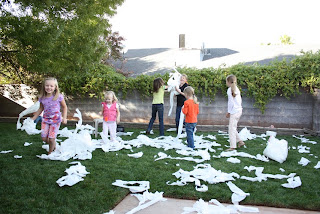 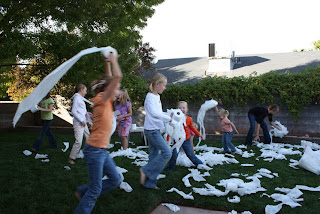 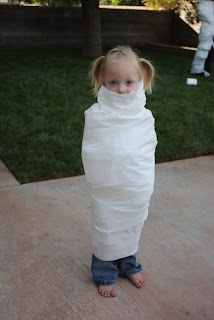 I have a new cousin named Gwen. She is really cute. I have never heard her cry before. I love it when she smiles at me. She doesn’t like it when Morgan wears glasses in front of her. When she does wear glasses Gwen just sits there with a bored look on her face. Gwen was born on August 3rd, 2009. She likes it when Lily smiles at her. I am glad that I have another cousin.
Posted by Lauren Frances at 7:47 AM No comments: